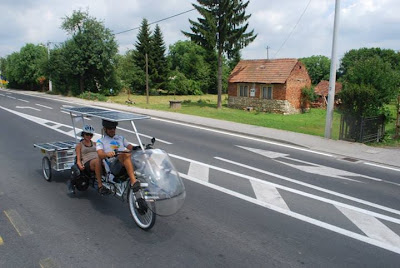 The Sun Trip is a simple and powerful idea : a starting point, an end point  7200 km away  and a free path for adventurers    on   solar cycle.    So  twelve   days  back  many  bikes, tandem, handcycle  and  trikes,  all   carrying solar panels left France  headed  EAST.  All had common   goal   Astana  in   but  no fixed route to reach there.    This is  a  An adventure in energy independence   as  put by a  competitor on a   trike -  Jorge Moïta.

The  story  being  told  in    French language all the way  and we  have to be  satisfied  with  google  /  bing translate.  Azub  team  posts their  progress  in English  also  http://www.facebook.com/CzechSolarTeam?ref=stream&hc_location=stream
and  that  seems  easiest way to  follow  the race. 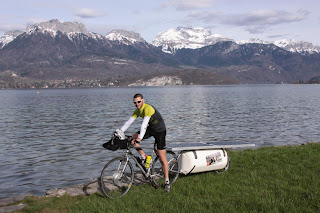 Three  years  ago  a  Frenchman  Florian Bailly  pedaled  into .  It was  a long trip   through 12 countries and across two continents.     Uniqueness of his  trip   lies in the use of  solar panels to recharge his batteries.  After leaving , the    solar cyclist traveled    through , , , , , , , , and , before finally reaching his destination, japan. 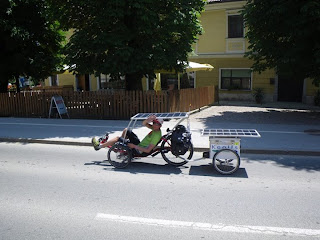 In the future he says it’s his dream to create a new solar electric bike race from to other places in the world  in    the following  article  - http://www.english.rfi.fr/environment/20101012-french-solar-cyclist-finishes-epic-journey-tokyo

Sure.  He kept  his word.  He has organized  a  7300 km  solar electric bike  race  that  is now in progress.  Now there  are about thirty participants and no two  machines are  alike.  Every team  built  their  own   e-bike   and  traveling without support crew.    No  fixed  route.  Just  two  checkpoints.  Naturally  their  position is all spread out  now   in  http://www.dolink.fr/carte/the-sun-trip

Northern route    means  less solar  radiation but  flatter  terrain.  Southern   route means  more  help  from Sun  to   tackle  hilly  roads.  The leaders of the North route are now in , the South route leader is in


While  searching suitable trike  for me  three years back,   I   had short listed  AZUB   trike   from .  They are  one  among top five  manufacturers in the world.   Naturally  Honza Gala with whom I exchanged much correspondence  appears  familiar.  Honza and his wife  had  pedaled in    in  the same year   2010.    http://www.azub.eu/blog/azub-eco-trike/azub-recumbent-in-the-world-highest-road-pass  &  http://www.galla.cz/cz-cyklistika/zanskar-2010-pripravy-preparations/#more-904

I  tried  to build a similar  solar powered   vehicle   after returning from that  1600 km trip    but unfortunately getting  the    specific    unique   components from abroad  is a very   difficult job.  Had  lot of discussion with  Mohith and Ashok.  The  response   from  solar   panel manufacturers  in   was  ZERO. 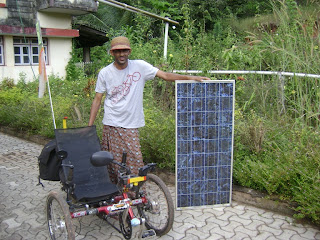 The   panels  made in India  are   low in efficiency,    high  in  weight, sturdy  built to withstand  cyclones  &  of unsuitable  voltage -  12 V.  I  needed  high  efficiency  36 V output.   It is not difficult to  rewire before lamination  stage but Indian  manufacturers  simply  do not listen to village  bumpkins. They  can certainly    help as in above video.

There  was  safety factor too.  I  had a  doubt  if  the  other road users, especially on motor cycle  will  show  decency.  Making it  more visible will be a compromise on  aerodynamics  and  will need more energy  to  push forward.

Then  there was no way to  charge  Li Ion batteries  with    DC energy  was  major  hurdle. Even  using  solar panels  means   need  to  take   DC to AC to DC  route   means  considerable  energy lost during conversion.    Now  there is  a   charger  available in  .   This  custom convertor  means it can  directly  connect  panels to batteries.
http://www.ecospeed.com/portable-solar-charging-solution-is-here/

My health and finances  are  also  not  strong  enough   to  make it happen.   Whirlpool  of  family problems  sucked me and  so  I  had to  keep the project  pending.   Research  in  electric cycle  mobility  is  totally  funded  by  common mans savings.  Naturally  it  suffers.  Anyway  this  race offers lot of hopes  and performance  of different  teams will   show future solar mobility options.  Some participants  have covered  200 plus km means  this  is practical too.  Btw, that is  something  I have been saying  loudly   past three years  but few people  listen.

PS:  My  bicycle  that  carried me in many parts of the world   had a  sticker in dynamo that said " Nuclear Energy - No Thanks "  that  I picked up in Germany  after  a  anti nuclear plant protest that  I had participated. 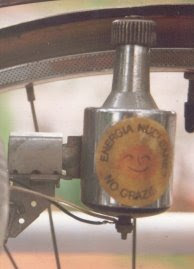 Posted by Govinda Nelyaru at 7:45 PM

Dear Guru Govind
Thanks for sharing the idea all over again after a few years!
It is the mystery in this world. If an an dreamer can not make it?..... Someone in else the world shall make it.
This mystery is at large since the time of Mandeleeff's Tables.

The inventions can not wait for one person.

They come out through another person.

Guru. thanks for seeding the idea years back.
Best wishes
Kesari Pejathaya

This is a great idea and could actually save people some fuel costs for short distances. Now-a-days there are small motor driven bicycles with small battery. This battery could be charged from a solar panel (which would also act as a shade/protection from rain to some extent) with the electronic devices that is available here.

We do have 36V panels in india and the weights are comparitively same as the other county counterparts. I was not clear as to why you need 36V panel exactly.

Infact the cycle sheds in some offices could actually have solar panel covering the area and charge the cycles during day time while the people are working in their offices.

Reason for 36V panels means it is easier to play on design of the canopy for trike or trailer. Sort of plug and Play. Otherwise we need to have multiples of three panels in series.

We need to have appropriate size Li Ion batteries too. Reva cars now have them after being around for many many years and people may not have second look on them. I say appropriate size because they are terribly expensive.

The last line in your comment can have offices and colleges added to make it more meaningful. Let us see.

Sorry for not responding earlier. It did not send an email for the updates to the blog!

The battery sizing has to be calculated based on the usage and usage patterns.