I had decided to test the eZee motor on Monday. There was lot to be done and I had to move with care. First I mounted the carrier bought from UK along with the trike. Then put the eZee supplied bag on that. Convinced that I have made arrangement to carry battery, I started installing the motorized wheel.

Actually this is job for two normal people. I started working alone as nobody was around. As a new feature in the 2010 model they have installed the parking brake on the trike. The wider motorised wheel was difficult to be pushed. So I released the brake spring & somehow got it in place.

When I finally got the wheel to its place, realized the chain that had to go in had been left out. So lifted the back side of the trike again, got the chain inside and positioned the wheel properly. This is a tricky job as we have to manage derailleur that comes in the way. This simple ten minutes job took almost half hour and lot of frustration as I had to squat alternatively on both sides every other minute.

I looked around for my 22 mm spanner to tighten the axle nut and it is nowhere to be seen. Then I felt driving to Bheemannas house nearby easier than searching for the elusive spanner. When I started from there with borrowed spanner, I remembered the place where I had left the spanner after a small job couple of days back after fixing tire to ATV trailer. . Finally the axle bolts were tightened and the whole set up was closely observed as mistakes can be expensive and difficult to get around. 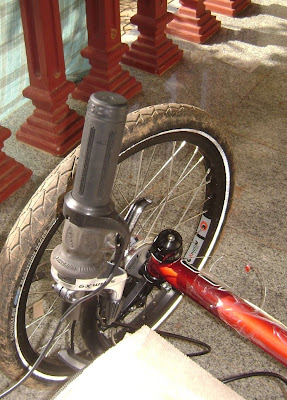 To get around certain practical problems I had to fix throttle above left handle bar which is bit awkward to control. The front derailleur shifter is also located there. I had not logical alternative. As we drive on the left side of the road, the back view mirror invariably had to go to he right handle bar. I also found it convenient to fix the meter so that I can easily keep eye on both. 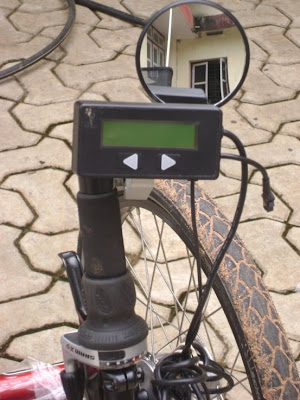 Convinced everything is okay I switched on the battery. A freak incident took place and the motor stated moving and bike hurtled forward. Luckily the battery wire got disconnected and there was no damage.

After that incident, I sat on the seat and switched the battery on. Everything worked perfectly and I had a beautiful half hour ride around my yard. It consumed about 0.4 Amps but this doesn’t not indicate much. The motor really helps in gathering speed and I had to get used to that. It was really heartening experience and I was satisfied with the performance. 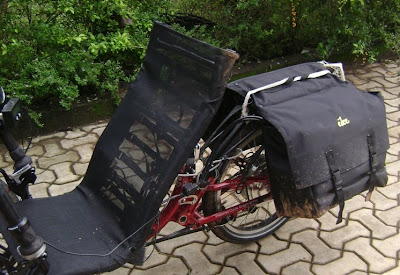 Posted by Govinda Nelyaru at 10:21 AM