Whether we can use power assist for our routine daily travel was a question which was in my mind for long time. I had some work in Mangalore, about 45 km from home and so decided to make the trip on trike.

It was around 8 AM last Thursday when I left home and weather was still chilly in forested area. The traffic was not too heavy and I had a comfortable ride. Crossing took some time as roads are bad because of construction work going on and I had covered 16 km to in 45 minutes. 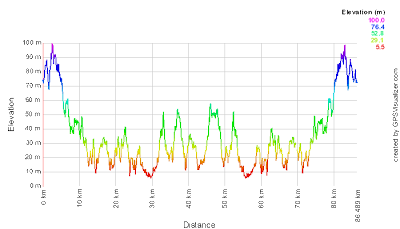 Roads after that was wide & smooth 4 lane double road and I had very easy time. Normally I have to keep an eye on backview mirror every few moments to evade vehicles coming from behind but wide road means there is ample space for those vehicles to cross. Sometimes I was able to touch 40 km plus while going downhill.

Finally reached Mangalore outskirts @ 9.55 AM after covering 35 km in One hour and 38 minutes consuming about 300 Wh battery power. Same journey by car will take an hour. I put that battery for charging at Ashok’s shop and went around the city attending my work.

Riding within cities is quite easy. With power assist, we can easily reach upto 25 km speed and keep pace with general traffic. Time taken to go from one point to another is also comparable. I wanted to take a small video but with the camera and camera mount combination that I had taken along, my head obstructed the view of road. I realized it only in Mangalore and had little opportunity to rectify the situation.

I paid courtesy visits to many relatives and friends apart from doing some purchases. The GPS tracks will show the route I took and those 15 km inside the city have consumed about 200 Wh power. Consumption within city is more as we use power frequently for acceleration. The roads within city are good but joints inconcrete road makes the ride bumpy.

I left Mangalore around 3.30 PM and reached home before dusk. Rains had started pouring in Mangalore much earlier but here it started after I reached home. I had raincoat with me but putting it on it is bit difficult for me and it comes in the way of pedaling too.

I had crossed 20 Ah power consumption while crossing Kalladka and the remaining part of journey was done with help of charge topup in Mangalore. Totally I must have done 90 km and delayed switching on GPS showed little less distance recorded. Total riding time was 4 hours 33 minutes and even by car – it will take three hours. I have used 850 Wh of power. So for comparison, one and half hour extra time with Rupees Four worth electricity avoided spending minimum Rupees 350 on Petrol.

Kannada newspaper Vijayakarnataka on Thursday published story about my trike trip which can accessed by clicking here and here. 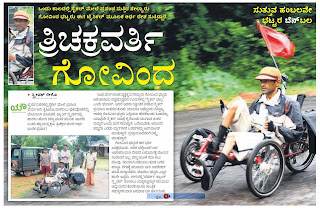 Unfortunately power assist cycling is not given prominence with more focus on my disabilities and on tricycle. Recumbent cycling means more aerodynamic design but it is wrongly portrayed as battery operated tricycle. 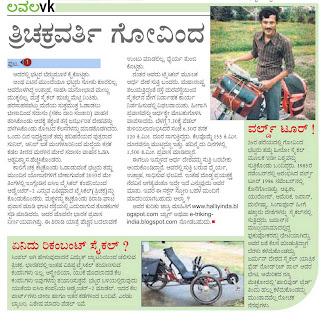 I agreed to talk to media not to tell everybody my achievements nor to tell people how I think they should conduct their lives. Such approach is common in environmental circles. In my opinion, a better approach is that of consciousness-raising. I can't tell people what to think, but I can suggest what they might think about. Pedal support systems for cycles certainly deserves such attention and I feel bad about a wasted opportunity.

Posted by Govinda Nelyaru at 9:39 AM

The power assist is, in my opinion, there provide assistance during only climbing. Climbing on a pedal operated vehicle has always been one of the reasons many people would rather take motorcycle or a car.

The problem with journalists is that they think they have absolute right to portray the topic in the way they feel it should be.Unfortunately these so called journos try to act know alls. They feel it infra dig to ask things they don't understand and and have ego as tall as Himalayas.even I was disappointed with that reporter.