My Drift X 170 camera started giving problems in November. I had got it in middle of hectic tour preparations in July 2010 and never bothered to register online for warranty assuming there could be little warranty support in . When Dinakar agreed it needed repairs when asked for second opinion, I registered it online with a follow up e mail that camera is not working. I was surprised to see their reply asking me approach their dealer, RACETECH in .
So I had to go to . I wanted to make better use of the trip and with my health conditions going to Bangalore itself mean lot of effort. I felt I can make use of this opportunity to show my trike to two people who means a lot to me.
I did not want to repeat the situation I faced in Bijapur railway station and decided to take a disability certificate. It took some time and I wanted to avoid peak winter weather too. So decided to make the visit on 18th Jan and booked the tickets on 12th.
Watching my position in waiting list on internet was part of my preparation for the whole week. Finally I got into RAC on previous day which meant seat assured and maybe berth too. I had pinpointed places I was visiting and loaded all the waypoints to my GPS. I had made complete travel direction chart similar to tulip chart used in Rallies.
I reached Mangalore Railway station around 6 PM on 18th Jan. I had left home at 12.56 PM and pedaled about 40 km to reach Mangalore Railway Station with some chatting with Ashok while my batteries were charging in his shop. The railway officials did not recognize the disability certificate I had [ Issued by Karnataka Government ] and charged me INR 60 for transporting trike in luggage van. There was some time to spare, I used the opportunity to topup my batteries again from the mobile phone charging sockets provided in railway station. 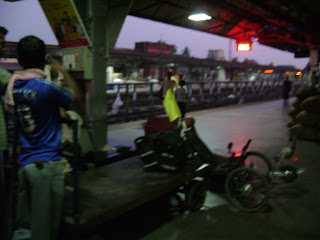 Reaching Yeshwanthpur I had to collect Gate pass from parcel office and it was in Platform six whereas my train was in platform one. So had to go to parcel office in middle of platform six along with my luggage from edge of platform one and collect the gate pass which will allow me to take the trike out.
Coming out of railway station and approaching Mathikere, I remembered relatives whom, I had not seen past fifteen years. So gave them a call but there was hardly meaningful discussion with my poor hearing. Then we agreed that I will visit them on the way back after visiting Racetech.
Harshad whom I was I was supposed to meet @ Racetech was out and I had to wait for an hour. I was getting frustrated as having come long way from home and wasting time here. I would rather be pedaling exploring more of . They said they have a demo piece they will lend me now & once replacement arrives from the company, it will be replaced with a new one. That demo piece was not ready in their hands and offered to deliver to me later and I gave my timetable and it was delivered to me in the evening. Being on one of its kind vehicle has its own advantage :-) Harshad’s assistant very easily located me near Sadashivanagar.
Bangalore city at EveryTrail

Venkatramananna was waiting for me near Dollar colony bus stop to guide me to their house when I was returning from Jalahalli and I spent time with them catching up the news and sharing some food. They had sent mail contains directions from indiatimes ID but it was never delivered to me by gmail & if I had their house stored as GPS waypoint, it would have saved me considerable amount of time.
Next stop was to meet Mr Kesari Pejathaya who had closely followed my trike trip(on his flying carpet) and I wanted to show him my trike. It was a comfortable midday 12 km ride to cooke town, mostly on Outer ring road. I had passed by same road about eight months back and I was shocked to find there was no progress in flyover construction work in two places.
Kesarijee was very happy to see me along with my trike. After reading his books, articles and exchanging numerous emails, I was keen to meet him in person. He presented me a autographed copy of his book ರೈತನಾಗುವ ಹಾದಿಯಲ್ಲಿ to be released on 25th Jan 2010. Time flew pretty fast.
The next stop was in sadashivanagar to visit Ra-chikki who first permitted me to go to cycle shop with their servant and learn to ride in a hired cycle. Those days I was spending nine months every year in a residential school near their house and opportunity to learn during vacation in our village was very little. The love they showed me during those days have made deep impact in my life.
I must have been pretty tired by then as I had failed to switch on GPS during last part of journey which is reason incomplete loop in map above. Finally I turned up at Yeshwanthpur Railway Station in fading sunlight. The railway parcel office staff tried to say it has motor and so will be charged for 600 kgs, the disability certificate I had carried no weight and it is very frustrating arguing with them. Finally they agreed to charge for 100 kg and it was Rs 110. I was thankful it was not INR 600 but still told them that I had paid only INR 60 while coming to .
I paid money and came back to the platform one with trike but without luggage receipt. When I rushed back after realizing it is missing, they told me not to worry and they will send it to the platform.
After coming out of Mangalore Rly Station next morning around 10 AM, I had some food while batteries were charging at Ashok’s shop. Starting from there at 11 AM, I rode continuously to reach home at 12.40.
Approx Distance by trike 120 km
[ 38 km in city + 82 km to and from Mangalore]
Moving time on trike 6 hour 16 minutes
Overall average speed 19.2 kmph
Energy consumption 1418 Wh
My battery capacity 720 Wh
The preparations I made with tulip chart and GPS helped to save time and avoid confusion. Google map had mentioned a Indianoil petrol pump in Hennur Road as HP pump and naturally I continued to ride strait ahead though I had noted another landmark, Charles school on left side . While coming from cooke town to Sadashivanagar I took a wrong road [that goes near cantonment railway station] that happened to be one way and that added little bit distance. Remote planning with maps do not take into consideration one way roads.
I took care to be visible to other drivers on the road, especially those of big vehicles. I reached the railway station before it is dark because my trike will be difficult to understand in dark by other road users. The people and policemen I spoke to were very courteous and helpful. Not being used to using flyovers, sometimes it becomes difficult to pinpoint the relevant signal lights.
I could not take the camera out and take photos at any landmarks as I preferred to keep riding. Camera mount was not fixed to the trike to prevent damage in luggage van. There was plenty of opportunities handing camera out requesting to click but this did not occur to me then.
I had taken One hour Nine minutes to travel 18.5 km from Jalahalli Industrial Estate to Cooke town. Though major portion was thru Outer ring road [that had roadblocks due to flyover construction work going in two places ] My speed was 24 kmph in outer ring road and other roads where there was free traffic flow.
I took 52 minutes to cover 10 km from cooke town to Sadashivanagar and journey time was about forty minutes with traffic signals taking away twelve minutes. Like in other big cities, I am convinced that power assisted cycle or trike can help mobility in traffic too.
Posted by Govinda Nelyaru at 10:39 AM

Dear Guru Govind
It is an honor that you visited me.
I appreciate your indomitable spirit and enthusiasm, your time sense and punctuality.
I appreciate your multifaceted interest, love for nature and patriotism.
I wish you all the best.
Warm Regards
Kesari Pejathaya

Govind sir,
It must've been very arduous journey for you. carrying luggage and taking care of trike. Salute your spirit. Keep rocking as always.

I was not in Bangalore when you visited. I wish had I been there we could have met. Nice to know that you met Pejatahya. All the best. Regards, RG Bhat