Having done 155 km in day during my long trip, I was keen on crossing 200 km per day which I felt was achievable by me provided battery charging is taken care of. Shankaranna who services my omni past ten years had installed a inverter in his Nano car and offered to join me. When we were finalizing our trip, he called his brother Mohan asking him if he will come with us. 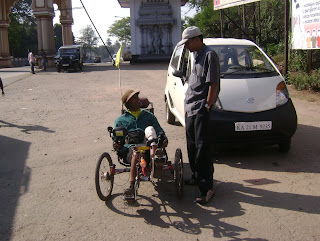 I was scared of chilly weather and left home @ 6 AM with three layer of clothing and lights on. The programmable meter from was restricting the power flow during wet & chilly conditions. So I switched it off till sun came up thereby losing power usage data during those few km. I could get the distance data from GPS. The usual road was dug up for up gradation and I used interior roads to reach NH towards . 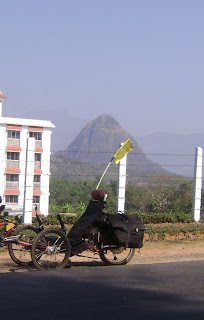 I was coming out of hotel after breakfast when Shankaranna & Mohan reached Uppinangady. There we kept the battery used till then for charging in Nano. They went inside the hotel for breakfast and I hit the road towards Nelyadi. Part of this moderately uphill road is one of the most enjoyable to pedal I found so far. Dinakar happened to meet us by chance and he gave proper road directions towards Dharmasthala. There are many interior roads in very good condition due to pradhana manthri graameena rasthe ......

There was a switch between Battery and inverter that started malfunctioning and connected cables became hot said Shankaranna and I felt it is a bad omen & will slow down our progress. Still we kept going forward & Dharmasthala, Ujre and Belthangady passed one after the other.

Passing Guruvayanakere I remembered old acquaintance Ranjan Rao whom I had not seen past twenty years. A local TV stringer chased us on motorcycle & caught us while we were having roadside discussion. There we happened to meet a staff of Ranjan who said he is in town & will leave for later. So I decided to see Ranjan Rao and followed him. Later we found that he had already left for and Smt Vidya Nayak whom we met arranged for battery charging. 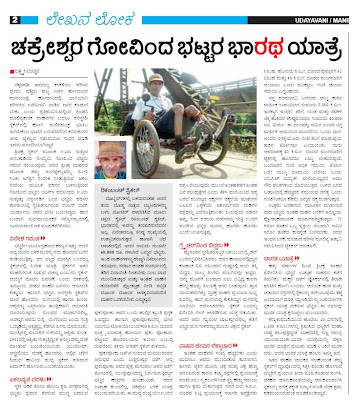 Our TV stringer friend after making a video clip summoned a Udayavani reporter who interviewed me while my trike batteries were charging. A studio owner in Ujre had hopped onto bus following us and he caught us near Guruvayanakere and we couldn’t say NO for his request for photo. This has happened to me many times, being followed by photographers and common man. I had to oblige them without losing sight of my target which sometimes is very tricky & I do not want to appear rude.


By afternoon, we felt we couldn’t do balance of 200 km as we had done only about 75 km then. Shankaranna managed to set right the battery switch by then that enabled good charging from inverter but having lost precious time we were compelled to be satisfied with less distance. 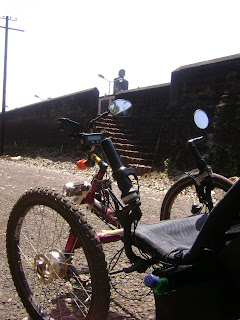 So took Venur road and had lunch @ Venur. I took a photo of trike in the road adjacent to Gomateshwara statue. Later narrow road towards Manihalla crossed hills and valleys pretty steep both while going up and coming down. It was quite enjoyable.

Shankaranna was holding camera most of the time with Mohan driving and so could capture plenty of memorable videos. This is first time I was able to get hold of so many video clips & five of them are uploaded to youtube which can be accessed by clicking here. I meet people all the time who capture me with camera or mobile but I never have access to those photos. The shots I capture sitting on trike never show trike or myself. So these photos captured today are very valuable to me.

Six hours riding covered one hundred and thirty five km. Once in Belthangady I did forget to switch GPS on for some distance. Maximum speed of the day was 48.5 kmph with moving average of 21 kmph. power consumed was 1500 Wh. Higher moving average and uneven roads resulted in more power consumed.

Posted by Govinda Nelyaru at 4:57 PM

congrats govindanna .its not the matter of distence covered .its the mater of your ambition/goal.hope surly you will complete the same soon.all the best

I just added your blog to "Networked Blogs" on Facebook. You can claim it as the author here: http://apps.facebook.com/blognetworks/blog/e_triking_across_india/