Pedaling with Scouts and Guides

Puttur Scout and guides cycle jatha
Scout  and Guide Cycle Jatha  in Puttur   was  a  whole day program  giving  us   entirely  different kind of experience  from the  one   held in Mangalore.  Sunil, younger boy  who  is with  scouts    was participating in   Cycle Jatha  and I decided to join him.  There was about  75 students on cycles.  There was ten member  street  play   team conducting  small dance drama plays  on   plastic  pollution  &  awareness on  uses of bamboo.  They  performed about 20 minutes  program in four places.

We left  Puttur at  9.15 AM  and first  program stop was about  5 km away in Kemmai.  The tarpaulin  was spread out as soon as we reached there and  sound system  was  organized   and program started.  Packing up immediately after program,  we went little ahead and took left  turn towards Sediyapu.  At  Sediyapu junction, children were   given  refreshments. 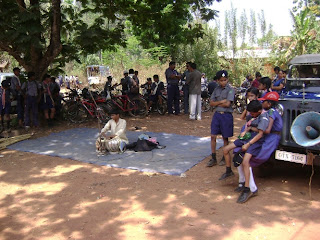 Little later   there was  a  steep incline and all brakes  were put under  severe  test. Some  kids complained it was difficult to control the speed   as it was long  downhill road.   We again   stopped after 2 km for breakfast.  That  house  was  of my relatives   and I charged my battery  a little bit. All hopped on bikes again and immediately there  was  a   wall to climb.  After that about half km in National highway. 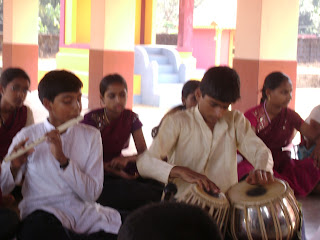 There was  short program in  kadeshwalya  village   &  we continued towards  riverside temple.  The  sumptuous   lunch   was  ready  for us on time which we had in temple hall.  Children performed their   skit  plus some music and then  to  river to play for a while. Teachers  bought them back by  3.30 and after  giving   fruit juice, put them on saddles. 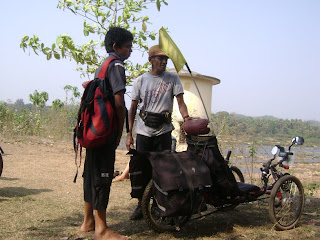 We took  slightly different route  while coming back with  3 km more  of National highway, most of it downhill.  I could show to one of the teachers who pedaled with us that  aerodynamic drag is less on trike  and accelerates   faster than cycle on downhill roads with no pedaling. 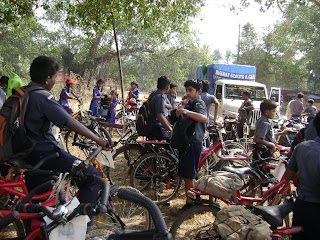 The most difficult part was ahead of us.  The  climbing a  steep incline  that was   about  climbing  270 feet  left everybody  out of breath.  Many of children  on single speed was  not  trained for  such climbing  also.  There was  watermelon  slices waiting atop the hill. 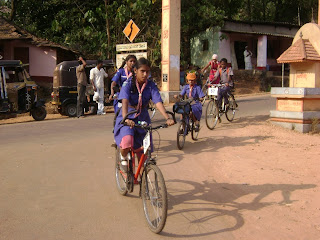 A primary school student, little Vaishnavi   performed so well in her little  single speed cycle which was amazing as the route  was  difficult for much older students too.  Many  of the cycles  were single speed and it is unfair  to put them  in  competition with  geared cycles. 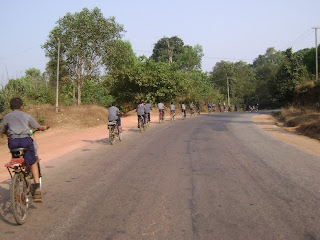 We continued  pedaling towards  Puttur  and  were  guided  thru APMC road to avoid  evening   rush trafic in Main Roads &  reached the starting point around  6 PM.  Organizers  have done a great job and I express  my gratitude to them.   My GPS calculations put the distance as 38 km  but the terrain  taken into consideration, effort was much more.
Return trip  to  home   was   another adventure. I suspected not enough charge left  and so went to  Shankarannas Service Station for  half  hour   topup.  It was  around  seven fifteen when I left there  and  I put on LED  lamp  tied to my head.  Light  beam  originating  very  near my eyes  highlighted   water  and dust particles  in atmosphere   and effectively acted as barrier.  Pure white light of LED is also  not as good as yellowish light  to show the road in such conditions.   Vehicles  headlights  helped me to see the road and tyres   have  got into few potholes on the way. 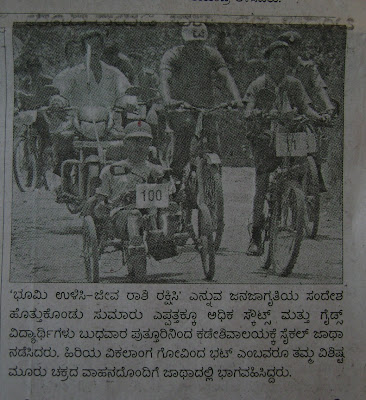 Two kannada dailies,  Varthabharathi from Mangalore [clip above is from  page 3]   and Suddi Bidugade of Puttur   have  reported the  event in thier issues dated 3 March 2011.   For  me  it was 70 km  including distance from home    which  totally  took  four  hours  to   ride and  have consumed about  850 Wh.  Sunil later reported  almost all children who participated  took  next day off to recover.  I hope and wish the children  participated  will  keep  cycling as mobility option all their   life.
Posted by Govinda Nelyaru at 1:00 PM

Nice to view more activities through pics and it is always a pleasure to follow young Scouts & Guides.
Best,
Pejathaya S M