My trike and myself was featured in two regional languages, Kannada and Malayalam daily newspapers past two weeks and common factor was both reporters were inconsiderate.

Few days back Anilkumar sent message from Puttur that my photo along with trike was in Suddibidugade, local tabloid. I was surprised as I had not met their reporter and there was nothing special. Later things fell into line and here is the report. 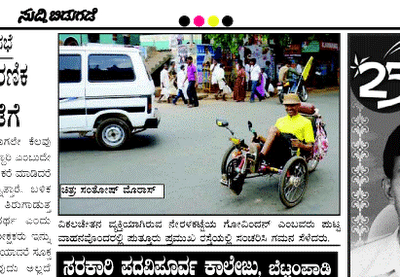 I had gone to Puttur two days earlier as I often do. A fellow in mobike riding parallel to me asked my name and whereabouts. Normally I don’t reply to people while riding in middle of city. My thinking is only traffic policeman on duty has right to communicate to a driver or rider moving vehicle. Anyway I gave him cryptic reply about my name and nearby location. I live in a remote village and many people may not be aware of that name. He zoomed past and took a photo from roadside. So single sentence report filed from these information contains only three mistakes - my name mispronounced, my village wrongly stated and that I am new to that town.

Last month I had gone to Kasargod, 54 km away to attend a meeting on endosulphon. Dr Shreepathy introduced me to a reporter - Mr Vinod of Mathrubhumi – leading Malayalam daily. I shared the facts and asked him to give me a hint if that is published.

On 17th May, exactly a month after that visit to Kasargod, I started receiving Emails from Kerala that - they have seen me in their paper and need more facts. After receiving many similar cryptic mails, I started looking around for reason. I asked with Mr Shree Padre, endosulphon activist and journalist - if he has any clues. He gave me probable hints and sent them Emails. So five days after publication, Rajesh of Mathrubhumi was kind enough to forward a small clip. 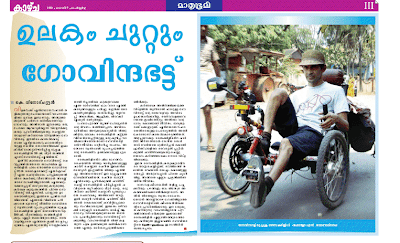 The clip is too small that you cannot read the printed matter. It is okay for me as I cannot read Malayalam language. The newspapers becomes trash by evening and same attitude is shown by the reporters towards subjects after the interview. I am not very keen to meet reporters as almost news reports so far ignored the crucial fact – this is unique vehicle in the world that makes use of human energy and electric power supplementing one with other.

It is unfortunate that most of our journalists do not exhibit professional conduct. Makes me remember a fake funeral video shot in two years back. One local TV channel over there without realizing it was a april fool prank picked up the video from youtube and claimed ownership.

Posted by Govinda Nelyaru at 2:37 PM