Efficient equipment for the trip. 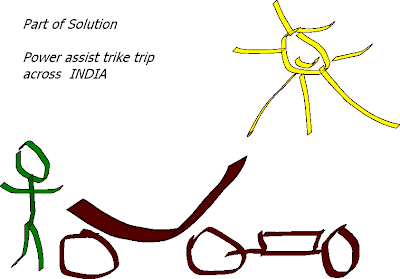 Transportation accounts for more than 35 percent of total energy consumed and emits very high amount environmental degrading chemicals. The whole idea of this trip is about technology demonstration of a viable transportation option. Many of the things I am using here are not being commonly used in India and so am giving the simple explanation.

Cycle is the most fuel efficient transport devise invented so far. When time and convenience taken into consideration Pedal assistance gains upper hand.

I propose to travel about 100 km every day helped by about Rupees 3 worth electricity. Same journey if undertaken by a car will consume five liter petrol costing Rupees 275 or in a motorcycle mean around Rupee 100 worth of Petrol. In fact, the cost of the electricity used is less than the energy equivalent amount of food necessary to travel the same distance. With great health and fitness benefits, electric bicycles do not only put the fun back into cycling, but also makes sense for millions of people around the world. It will also bring smiles to the faces of people I see on the way.

Besides the derailleur and pneumatic tires, clipless pedals may be one of the most significant bicycle innovations in the history of cycling. Clipless pedals make the rider to be more efficient by providing a better foot-to-pedal connection. What is happening is that a clipless pedal allows the rider to pull up, as well as push down on the pedals when making a complete rotation of the cranks. 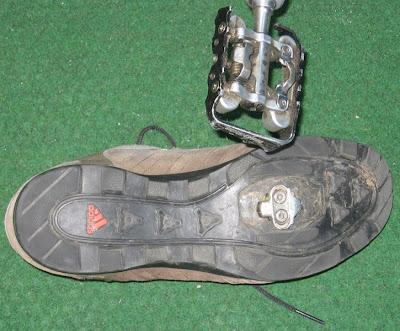 Studies have shown that by using cycling shoes you can improve your pedaling efficiency by about 30%. Imagine that over the course of a century ride. You'd have enough energy left to do another thirty kilometer.

People normally keep their foot in the pedals in wrong way observes Rohan Kini The most efficient way to pedal, would be to place the ball of the feet along the axle of the pedal, as shown in the picture below.

This is a pretty common mistake that I see on the road though. Most folks seem to pedal with the arch of the foot ! - writes Rohan. I tend to agree as I have been doing same mistake earlier, like in the picture below.

The cleats make sure that your leg and pedal make contact in most advantageous and efficient way.
Other reason I am using cleats is because the legs are much closer to ground while riding the trike and more injury potential exists. I have noticed that (in my trainer set up) I no longer press the pedal during upcoming stroke as I used to so that it doesn’t fall off. I feel this contradictory pressing wastes some energy.

Next part is seating posture.

This reclined posture considerably reduces the aerodynamic drag. If you study where the energy goes in riding a bicycle you will find out that at speeds over 25 km/hour, 90% of your energy is used to overcome wind resistance, only 10% goes to bearing friction and rolling resistance. Cycling into a strong headwind you become very aware of that fact! I still remember the very bad day long back I had near Lonavala, where the progress on level road was very slow in spite of my best efforts. When pedaling around Netherlands I happened to see a recumbent cyclist and I could never catch up with him in spite of my best efforts. It was mainly because considerable energy I put in was used up overcoming air resistance and that cyclist was using more of his energy to go forward.

Seating
The word ‘saddle’ indicate both horse seat and bicycle seat. The bicycle was created in 1817 by Baron Von Drais for the entertainment. Inspired by a horse, it was made of wood, had two wheels and its rider had to push with their feet on the ground to move forward. With the bicycle evolution this kind of mini horse saddle has remain unchanging. Its size has been reduced to the minimum, generating at the same time many pains because most of rider’s weight is on a too little surface. Curiously we can’t find any other vehicle or furniture with a seating surface as minuscule. It is not only uncomfortable but also leads to lot of health problems. 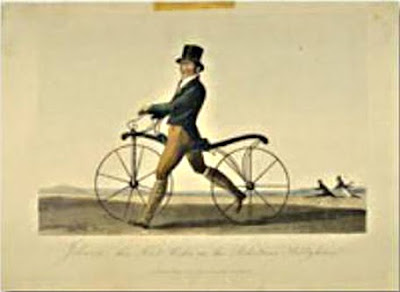 Recumbent cycles and trikes are a pleasure to ride. Recumbent seats are larger and you actually sit in the seat. You sit slightly reclined, back fully-supported, arms relaxed, neck straight; in a normal sitting position. You aren't perched on top of a narrow saddle which can tend to cause numbness and chafing. You are comfortably seated and can even change your posture once in a while.
Pedal assistance
In difficult climbs and for higher speed the cyclist tends to stand on the pedals making use of body weight. This is very inefficient method that wastes energy by lifting body out of seat. Derailleur gears extended the cyclists horizon considerably. Such difficult circumstances can be further helped with the pedal assist motor. The pedal assistance flatten the hills considerably and you arrive at the destination with little sweat 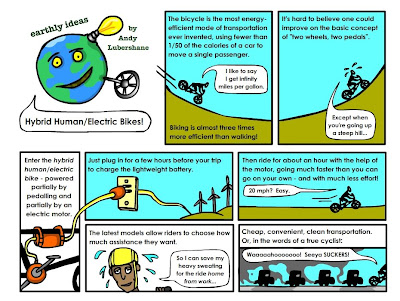 Early pedal assistance kits or for that matter, most electric vehicle developed so far was powered by Lead Acid Batteries, the technology that is 150 years old. The Lead Acid batteries are very polluting and inefficient. The 100 year old Peukert theory affects all storage batteries but is Worst in lead acid.
The manufacturer's amp-hour rating for a battery might read "186 AH", suggesting that you can draw 1 amp for 186 hours, 46.5 amps for 4 hours, or 186 amps for 1 hour. For a common lead acid battery, the reality for the highest current example is that you'll only get the 186 amps for roughly 38 minutes, 64% of the hour you expected. Your battery power will last longer if you put less load but then you have to carry more capacity batteries .

Lithium batteries power packs are state of the art in battery technology. They are on average 3 times lighter than lead acid batteries. This means a lead acid battery with the same power density would weigh more than 12 kg’s, i.e. it would use most of its energy just to move the battery around. This Peukerts value is less in Lithium Ion batteries that is used by me. This has better storage capacity, longer life and better working performance.

Almost everybody have used Li Ion battery as they are present in Mobile phones and laptop computers. It is also almost a third lighter than NiMH batteries with the same performance. It lasts about 60% longer than conventional lead acid batteries and almost 25% longer than NiMH.
My American cyclist friend Mark http://www.solarpoweredbike.com/ says electric assist bikes are heavier and it can be a challenge to find the right balance between weight and extended range. You always have to plan your trips around your battery capacity, otherwise you risk having to go up a long hill at the end of the day with 30 lbs of dead weight in motor and batteries if you are out of charge

The geared hub motor made by eZee that I use are most efficient and dependable one in the market. This has remarkable pedigree as Trans Canada trip by Justin was done using these and they have been part of many adventurous trips. Wai Won Ching, the founder of eZeebikes has “Treat the earth well” as his company motto. He is very much committed to low carbon transport 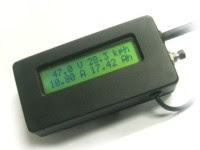 The Cycle Analyst that I am using is the first digital battery monitor in the world originally designed around the specific needs of electric bicycles and it has become the e-meter of choice of other EVs too. .It tells you the consumption and also allows you to set maximum power that can be drawn from the battery. It can act as speed limiter too. So I will be knowing the power consumed and rate of consumption, so that optimum utilization of available power can be made. Volts, Amps, Watts Amp-hours and Watt hours are some the information it displays.
One square meter of solar panels will make me self sufficient. Aerodynamic design and placement plus wiring of the solar panels are beyond the scope of this trip. For me the batteries are very valuable item as they cannot be easily replaced in India. So I am not putting them at risk by connecting solar panels in parallel. It will also be better to take one thing at a time.

Trailer
Trailer for bicycle is a untried utility in India that offers immense potential. Trailers have an advantage because the bike itself carries no extra weight, except some on the rear axle attachment (the trailer itself can be loaded with up to 70 kg). This allows the rider to shift weight as if without load. It is much easier to carry the weight in trailer than in the vehicle and about 60 % extra weight possible with the same efforts.

Cycle trailers are detachable, allowing the bicycle to be used for personal transport. They failed in many countries because of added cost and did not click with popular imagination. Single wheel trailers are extremely maneuverable, with the trailer wheel tracking very closely with the rear wheel. These can easily be ridden on narrow passages.

This single wheel trailer was designed by a aircraft maintenance inspector named Philip Novotny who quit his day job to found the BOB (Beast of Burden) trailer company in 1996 and is one of the most popular touring trailers. 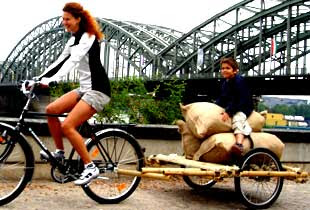 I wanted to assemble and carry along a bamboo trailer http://carryfreedom.com/bamboo.html but felt that I cannot do such a long trip with more chances of trailer falling apart. I would have taken this trailer if I had support staff to assist me and that would have been great. There is chance that I may take single wheel or two wheel trailer and if I fail to get one fabricated soon then will drop the trailer proposal.
Practical considerations have made me to drop this trailer proposal.
Conclusion
Electric pedal assist and better bicycles can make the journey more enjoyable and can displace cars. With them hills on your way are flatter and your rideable range just get longer. One of the biggest advantages is at destination you do not have change clothes or take a shower. Families thinking of second car can certainly use these cycles.

Batteries are expensive to replace and you have to start saving money for battery when you start using electric assist bikes. It is not much cheaper but just environment friendly. Money used to buy petrol daily if kept aside can certainly buy batteries.
Posted by Govinda Nelyaru at 2:30 PM