It started to rain as soon as I left Kudala Sangama. I was determined to move on and it was very pleasant cycling in light shower. The approach road to Kudala Sangama was very good but once I reached the highway, it was same old story. Good thing was there was no potholes, just pockmarks for next 20 km.


The land was very level and you could see for very long distance all around. The black soil was tlled but there was no evidence of planting yet. Saw some sunflower fields at distance. 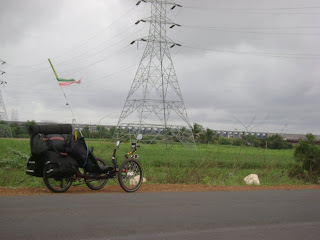 I reached Almatty at 9.00 AM and had good breakfast there. The photograph above shows Almatty Dam in the background. Checked my cleat and the screws appeared okay. The temporary arrangement made yesterday was working well. I may continue with this till I get better screws somewhere. I feel the constant rattling might have played a role in loosening the screw.

There was plenty power to continue then and I decided to have power topup at Muthgi Cross which is supposed to be 20 km away. I was in a shock when they said power comes at 3 PM while it was still 11 AM. Tried at a petrol pump but they said they don’t switch on power continuously. So kept moving and hoping for a miracle. 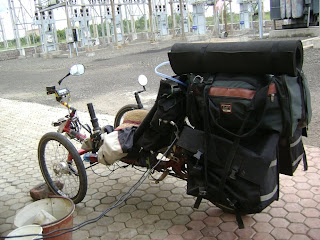 It happened. When I consumed about 19 Ah, when I reached a KPTCL substation. The lone operator there was sleeping & I had to woke him up. Shivananda helped me in hooking up chargers to power supply but as soon as we completed it, there was power failure there also. So we waited for half an hour and finally power started to flow at noon.

The roads continues to be very strait. Some drivers do drive rashly but there is no shoulders to move on. The road edges are very steep and could topple the trike. The dual lane work is going on and most of roadside trees have been cut. Actually I was a unfortunate witness to JCB cutting tree. So no shelter if it rains.

I was under impression that I can go to Horti and stay there. People I met said there is no lodging facility in Horti and I have to go upto Zalki, 50 km away & there is little chance of reaching there before dark. Since this is National Highway & lot of fast moving trucks present, I did not want to risk at fading light. So decided to stay @ Bijapur.

Since I stopped early, I asked for a engineering college so that I can expose them to this most energy efficient way of transport. That gentleman I met on the road said there are two in city & took me to gate of one. The Secab college that I went to failed to understand the rare opportunity they had and treated me like I had come for free meal. So pedaled out of there into Hotel Lalith Mahal.

Did two stupid things about data collection today. Failed to reset Cycle analyst electronic meter in the morning and reset the GPS without recording the track in the evening. I was concerned as last time when I switched GPS off, it showed low battery indication and in haste to put battery for charging, failed to transfer the track to computer

Will be entering tomorrow. So this is last night stay in Karnataka. Then I can say having pedaled across two states.

Posted by Govinda Nelyaru at 9:05 PM

Hope, once you reach Maharashtra, you will continue to get assistance from locals for charging your batteries.

Wishing you safe, happy and adventurous journey ahead.

good going !
this years unpredictable rains troubling u a lot !
what a great trip.

What an irony that an Engineering College personnel did not understand your efforts! But not to worry, there are plenty here watching you on the blog.

While browsing your another blog, got this link. Very interesting blog and i really appreciate.

All the best for your journey. Have a safe journey.

You have retreated to fight a better war.

I've been following every day. Was just wondering if it wasn't possible to get the throttle repaired on the way. Good luck with the rest of the ride. Please don't give up as re-starting is always a hassle.