The Lalith Mahal hotel was best lodge in my whole trip. The trike was parked just outside the door of the ground floor room so that loading and unloading of the trike was very easy. The food was good and was just few steps away. There was hot water in the tap and naturally I waited till 7 AM just to have pleasant hot bath.

Meanwhile in the morning I went to KSRTC bus stand to ask drivers and got input that Arakeri road is not too bad. There was many road options before me and I decided to take a local road to Pandharapur instead of National highway options. Having spent some time in during my childhood, sight of well maintained was a good sight for me. I took the photograph sitting on trike while passing by bus stand. 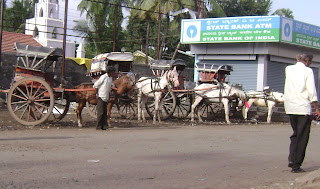 The road was not very good but passing thru villages makes it a very pleasurable experience. Two youngsters in motorcycle offered to share a cup of tea in Siddapur the last town in Karnataka side which I accepted. The border is simply difficult to make out but for a marathi board indicating the distances to different places ahead. 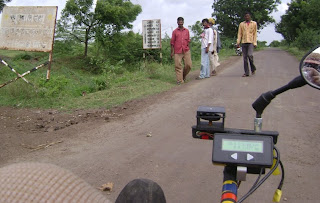 It takes total concentration to ride in that road which was comparable to Karnataka roads & not better. I had covered about 6 km in Maharashtra when this happened. All of a sudden the throttle in my left hand came loose & when I noticed the spring inside was visible. Immediately I stopped and tried to rectify it but it did not seem to be working. Considering the horrible roads that I had been in northern Karnataka, I was not surprised as the lock of this throttle broken. It could easily be equivalent to three years of our normal use or more.

Then I took out the other assist control devise and fixed it. WaiWon of eZeebike who supplied this from China had advised me to take this along saying it could be used in throttle failure circumstances. So continued another two km with this set up. So some power can be fed from battery to wheel but there was no fine control over that. It was sort of preset and could mean runaway vehicle. 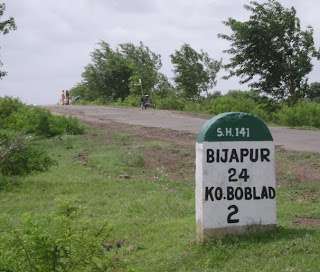 It can be used in roads where there is no road humps & roads are predictable & smooth. It should be matched with the brake lever actuated cut off so that when we apply brake, the power is automatically cut off. I had this at home and felt get it is not easy. Moreover I had brakes fixed to front wheels only and little control over power fed to rear wheel can lead to dangerous circumstances.

With a makeshift arrangement for shoe cleats already in place, another major failure was too much of a risk. I could not get suitable screw for the shoe cleats in Bijapur also and without shoes locked in, riding even 100 feet is difficult. When I asked about railway network with locals, they said no network is available nearby in the road ahead. So decided to come back to Bijapur as continuing in the crippled trike did not seem logical. Moreover next town Mangalvedha, was too far away.

On the way back I stopped under a tree to analyze the situation and access internet. There was no net signals nor Cell One signals available there. Some kannada speaking locals happened to pass by and they offered to arrange some battery charging. When we went near a shop there was no power and expected to restored @ 12. Waited for about 20 minutes and no signs of power even after 12.20. So power shutdown and road condition in rural appears to be similar that of Karnataka.

I was terribly short of time as evening train to leaving around 5 PM and had to book the trike well in advance. So slowly rode towards Karnataka and I realized I was on this side of border after hitting a hump and all three wheels were off the ground for a moment. Gradually I got used to this knob turning business but coordinating it with pedaling was not easy.

I asked for the railway station and was said I had to take left turn at a particular circle and bus stand was half km strait ahead. Still I opted to have lunch at Lalith Mahal hotel as the staff over there knew me & will watch over my trike & bags when I have lunch. After a quick lunch, rode to railway station. Seeing the Gol Gumbaz sign, I went inside for three minutes just to take a snap. 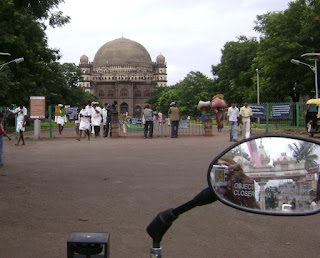 I must have cycled about 60 km on this day. I have done about 1400 km cycling from Kanyakumari and including the distance 100 km done from Trivandrum to Kanyakumari to that - total will be 1500 km over 15 days of cycling. The story of traveling back home will be in next post.

Posted by Govinda Nelyaru at 12:31 PM

Sad to hear that the trip came to an unexpected end. Do you have any plans for repairing/replacing throttle assembly and then restart the trip?

Govind you have lost just a battle. But don't worry the war is not finished yet.

Govind why don't you come through Mangalore on your way back ?

Good that you ndid not take the impossible odds.
You have withdrawn to fight a better war next time.
We wish you a successful second lap after making elaborate repairs & well meditated preparations.

What you have achieved until now is GREAT!

We are proud of you!

Sad to hear this turn of events, Govind!

Sad to hear an unexpected end..No worries..Whatever You have achieved is really great!!
Take care,
- Vanitha.

No worries. There is always a next time.