My plan for returning was to take a train and come via Arasikere or Bangalore. So I went to Railway Station after having lunch at Lalith Mahal. The concerned person booking parcels who himself had pronounced limp while walking was a crook. and wanted to exploit me. With a handicapped certificate I could have got free passage for trike, we both agreed.

Knowing it contains a small motor, he said it is going to cost me INR 750 to book it to Bangalore as nobody will come near the parcel wagon in Arasikere to unload in the middle of the night. I said I spent just INR 100 to take it to Trivandrum from Mangalore. He made a scene of talking to his superiors and confirmed it is going to cost what he has already quoted, Rs 750.

While I was walking out of there somebody said there is a VRL bus leaving Bijapur @ 4 PM and just an hour was left for that. My batteries were low on power but I still coaxed them to take me 4 km to VRL office. The booking clerk said the top of the bus is already loaded with luggage & he cannot arrange for its transport.

So I came back to bus stand area and saw Ganesh Travels bus office and it was repeat of VRL story - they have regular luggage etc. It looked like they wanted to exploit the situation. By that time I was sort of desperate. Next came near Lalith Mahal hotel & saw Durgamba bus office. They said they have tickets for days bus leaving in about an hour and can accommodate trike. I said that I will come back after a tea.

When I told my story to cashier @ Lalith Mahal, he offered to get some discount. He said I should have approached him earlier & could have arranged with the busses, I already spoke to VRL, Ganesh - if necessary. He bargained with the bus agency and I reached Mangalore with my trike for Rs 470 including loading / unloading tips.

The trike was loaded by bus agency office staff and hotel boys loaded my bags. I was sort of running around clueless. Luckily everything was in order. I checked the trike that was tied up in top of the bus in Jamakhandi which is about an hour journey and it seemed okay. 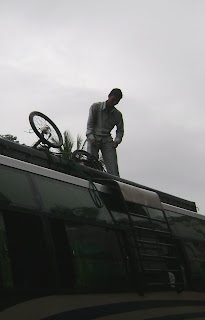 When it reached Mangalore, it was upside down and there was considerable damage to the luggage carrier. I was lucky that nothing was missing. Later examination revealed that water had entered the controller which is very important electronic component   and have spoiled it.   The bus luggage receipt had put the valuation of goods as Rs 300 only.

In the heavy rain I removed the carrier and then summoned Ashok. By coincidence it was Ashok who had put the trike on train luggage van many days earlier on the way to Trivandrum and had come to my help when I reached Mangalore. Both days, it was raining. If the carrier was not damaged, I planned to ride it home – about 45 km after charging the batteries. So left it in Ashok’s house and he offered to deliver it to my home next day.

Posted by Govinda Nelyaru at 2:42 PM

fine
things do happen with out our control.these are the real essence of a journey like this.
congrats for a good trip.
hope u contineu this jouney at a later date. With a support team and better preparation.

I think a full South India trip will be good enough. You covered quite q bit this time. Covering North without support team might be difficult. You need to also tackle the language barrier!