I  crossed  Mysore  without  asking  for directions  as  I  had  spent considerable  amount  of  time  there.  I  took  Chamaraja  Double  road    and  to  Hunsur  road  via Crawford  Hall. Everything  seemed  familiar  but  less  trees was  noticeable.   Thought  of  calling  friends  but  that  also  meant  losing  precious  daylight  hours. 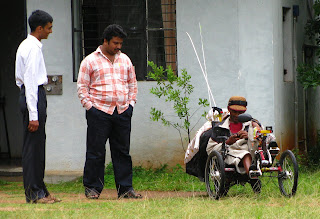 Posted by Govinda Nelyaru at 3:19 PM

hi
you did not mention about your own food in the noon !.
keep yourself fit sir.!

Have a restful day!

I wrote again to Kendasampige.

Excuse my flaws if any.

I appreciate your strong determination. Rain or shine, charged or uncharged, you're going!

Good to hear that you have reached Hassan:))..goodluck..

YOu are always inspirig to us! I saw your blog just now. It is really inspirig.
Good luck.
Regards,
Balu Hegde