It was still raining heavily when I decided on a trip to Sakleshpur involving climbing Shiradi ghat road. Boys were keen to join me and Dinakar wanted to shoot some photographs. Boys will miss only half day school was on reason for scheduling it on Saturday 30th July. We couldn’t do it on that day as it was raining heavily and postponed it to next Wednesday. Moreover there is just two weeks remaining for my big trip & this was urgent. So decided to take my Omni as support vehicle during this trip.

The climbing data is crucial for realistic long range trip planning. This is also important as there is no lodging facility in about 70 km between Uppinangady & Sakleshpur and I had to think about options before me in such circumstances. 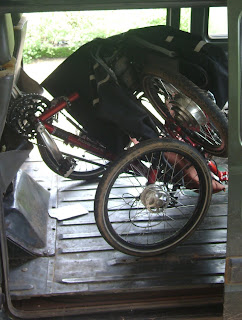 Since we had only half day available on Wednesday afternoon I decided to start from Nelyady as I wanted to reach real ghat section with plenty of daylight on hand. So loaded trike on Omni, collected boys from Schools around noon and headed to Nelyady. We first had lunch there & assembled the trike in Ayyappa temple premises. Finally I could start pedaling at 2 PM. The sky was dark with thick clouds & so I put on the raincoat from the starting point itself. 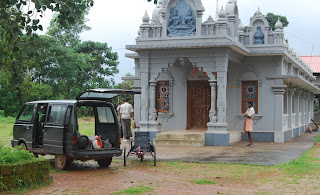 Within two km there was heavy rain and pedal assistance was reduced to almost zero. Since it was still early evening with many hours of daylight ahead, I decided to continue with or without pedal assistance. Sometimes it was very hard pedaling and slowly I could see improvement in assistance support.

A gentleman followed me on his scooter for some distance and he turned out to be friend of Dinakar. He advised us to have a red flag as the trike having low profile is not very much visible especially during rains. So Dinakar borrowed a red cloth from his relatives on the way & made a flag. The visibility improved considerably then. I had forgotten many things on that day mainly because of power failure early morning & that included the flag. 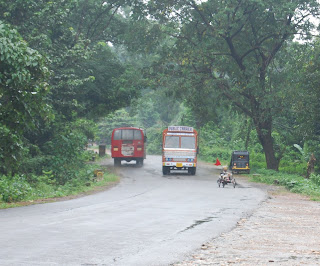 Finally we reached Shiradi at 4PM. I requested my support team to go little ahead and order tea as I did not want to get off the trike or sit in the trike till tea is prepared in the middle of small town. The first question invariably gathered people ask is how much this cost ? which I avoid to answer for security reasons. We continued immediately after having tea. Again we had some brief showers that hampered the power assist but I somehow determined to continue. Moreover this was only trip planned with support vehicle & I wanted to make full use of it.

Roads are in horrible condition in most part of ghat roads and climbing was very difficult. There was plenty of potholes & sometimes I had to pedal in the wrong side. It was not very dangerous as everybody was compelled to drive slowly & I had sufficient notice of approaching vehicle. Lot of other road users and bystanders were waving at me and showing thumbs up signs. 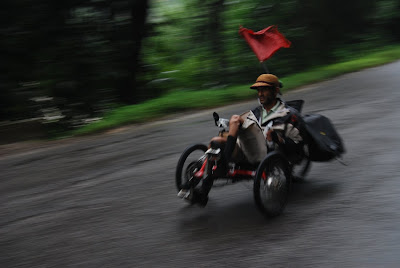 Apart from considerable climbing there was some downhill rides too. Luckily the roads were in better conditions in such places. With brakes only in two front wheels, sudden braking was simply out of question. Road was wet & I kept the speed limited to about 35 Kmph. I had a scary downhill ride in a winding road little after Maranahalli in fading light.

I had overtaken three gas tankers & once in fading light my support team was very scared. Luckily in those occasions power assist system supported well my furious pedaling.

We finally stopped near a roadside hotel @ 730 PM and had Dosa plus tea. The trike was folded and loaded to Omni. The total distance covered on trike was 50 km that also involved climbing about 2500 feet. The trip back to Nelyady took two hours whereas my triking uphill had taken five and half hours. I had used up 15 Ah out of 20 Ah of my battery capacity.

I could not make GPS tracks as its batteries were low power & though we changed them, it was sometimes in support vehicle and was not switched on. The distraction because of assist failure, frequent rain was too much. So I did use it to measure the distance on the way back but tracks was unusable as it overlapped with earlier tracks. Youtube links of the trips are http://is.gd/e54i8 and http://is.gd/e54z2

It was nice that there was space for me & Sunil could curl up in the back of the Omni and little later Anil took my place. I could not spend much time without moving in tight situation. Finally we reached home @ 1158PM after dropping Dinakar @ Puttur.

I am very happy about successful completion and my calculations about climbing turned out to be perfect. So I can make more realistic time estimations in different terrain now.

Posted by Govinda Nelyaru at 12:23 AM