Morning went to sunrise viewpoint  within Vivekananda Kendra  campus   and waited for half hour. There was no sunrise view as sky was full of clouds. Came back & packed my things on the trike. Went to canteen only to be told to come back after ten minutes. So again went back to work on organizing the things on trike. Finally left at around 8 AM. 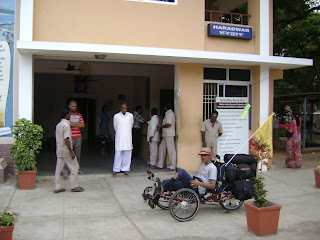 The link road to NH 7 from Kanyakumari was more or less like our roads in Karnataka. Once it connected to NH 7 the picture completely changes. Four lanes wide roads with service roads wherever required. The scenery was great with lot of windmills all around, most of them producing electricity.  I  got  down  from  trike  to  take  photo  assuming  this  was  unique  but  latter found  myself  admist  hundreds  of  windmills.
Around 1130 I had planned to take midday break. Then I noticed the drop of power. All the time I was only observing Ah consumed but did not pay attention to Battery voltage. I was shocked to find that had dropped to 32 V which I presume is critical and it happened near Nangunery. So went near a hotel nearby and asked for some power,   I had assumed I did not charge the battery properly  previous day  and so it was exhausted by 14 Ah instead of expected 20 Ah. 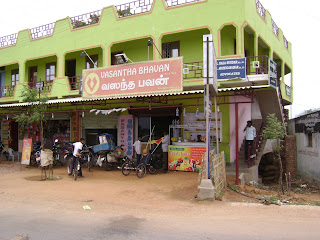 Then A L Siva who owned that hotel Vasantha Bhavana and speaks passable English offered to help. The first plug point we went near had reversed polarity. Then parked the trike near juice center right in front of hotel and took connection form there. After a while I went to check the charging & found chargers were bit hot and switched them off. Then checked the battery voltage. One of them showed 37 V and other did not show any. Then I found the connecting plug had become loose while zooming in national highway & had lost contact. So only one battery was contributing power. This made me happy as that meant charger is okay.
After a heavy meal over there @ Vasantha Bhavana I started around 145 PM. I paid only for my meal and Siva did not accept money for charge. I agreed to send him the photo but the email ID he gave was defective. The sky was bit cloudy and I made good progress. Today power usage contributed by both battery and me was rather high as there was heavy headwinds and crosswinds. Around 330 PM I dozed a bit but 6 lane highway had little traffic at the moment.
A notable factor in today’s ride was lot of vehicles stopping after crossing me & follow me for a while after I cross them. It happened quite a lot of times but they never made attempt to talk to me. After Nunganeri there was sort of flyovers that consumed more of my energy.
Around 515 PM I found the power consumption was about 29 Ah with little safety margin. So I felt it is better to stay in Kayattar if lodge is available. This is just few rooms for hire and not really a hotel. Patrner keeps a motorcycle workshop in the front side. First they did not permit bringing the trike to the room but later agreed. About one hour later there was heavy rain and there was fair chance I would have get caught in downpour if I had continued to the next town.
I have  done  115  km  today  but  the  GPS  failed   to  track  the route.  Hope  I  can  set  it  right  tomorrow  but  I  don’t  have  GPS  manual  here  with  me.  I  was mostly  pedaling  @  24 kmph  but  ultimately  moving  average  was  21.4 km   in   5 hours  and  24  minutes.  Power  consumption  was   29 Ah  with  1112  Wh.   So  my  midday  charge  contribution  was  about  9  Ah  we  can  assume  as  my  capacity  is  20  Ah.
I  keep  making  small  mistakes. Yesterday  I  was  under  impression  that  drift  camera  was  in  video  mode  but  it  was  still in  still photo  mode  set  on  the  previous  day @ Vivekananda  rock memorial in  Kanyakumari.   So   some  good  footage  opportunity  is  lost.   The  language  and  content  of  the  blog  too is  suffering  and  I  have  to  compromise  my  standards  here  little  bit.  I  will be  updating  my  whereabouts  in  twitter  at least  twice  a  day  but  this  story  may  be  delayed..  I  will try  not  to  allow  this  to  pile  up.
I  was  not  really  lazing   in  kanyakumari  for  one  full day.  I  was  busy  with  the  groundwork  for  the  trip  which  I  expect  to  be  more or less nonstop.  Everyday I  will be  traveling  couple  of  kilometers  and  targeting a average  of  100 km per day.   Evening I  paid  a  visit  to  Vivekakanda  rock  memorial. 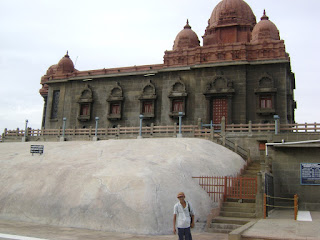 Reading your update is just like riding with you!

We are all with you!

Have a Great Day!

Mr govind wish you all the best

Hi Govind, We are following you. Keep pedaling! Cheers, Ravi.

The windmills remind of me my own ride. Heavy headwinds at this point !

Very inspiring trip.. You are living a life which many people can only dream of.. hats off