I could not pedal the trike for many days as there was heavy rainfall and for a few days there was no charger to charge my batteries. So today when I saw the opportunity naturally I was happy.

Half km of the approach road to my house is very muddy. So I cannot take the trike out during rainy days as it becomes very dirty and consumes more power. Climbing uphill becomes difficult as muddy road do not give good traction and is tiresome. So I prefer drier road surface and do not take trike out as soon as Sun comes out of clouds.

Meanwhile I had made few changes & adjustments. So had to sharp keep eye on those things and had to take tools along. I realized my mistake when the cleats unexpectedly released my left shoe in a bumpy road. It was not tight enough and that happened few times after that but luckily there was no leg injuries, just little bit sprain.

Two weeks of rainfall have considerably damaged the road surface in many parts of Highways. The ride today was more bumpy and naturally took more time to pass certain area.

The assist controller was tied with the rope earlier. Yesterday Anilkumar came and helped me with proper mounting of the controller. It was bit tricky as the rectangular shaped controller had to be mounted on the round tube of the trike frame.

Both my cycle meter and drift camera are supposed to be waterproof but the sunny weather resulted on condensation of water vapour. So it was difficult to read the meter while moving and videos I recorded was not sharp. So it was bad start with Drift camera about trip recording. 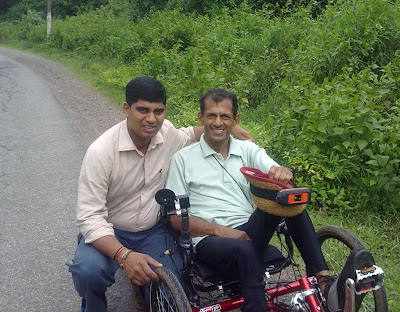 There was a chance meeting with Nibeesh who was traveling in the same road and spent some time talking with him.

Afternoon it rained and I only took trike to post office about 2 km away to post a letter and did not record that data.

PS: When I look out of the window no on 28th July , I see heavy rain and total cloud cover. Maybe we will have rain next two days. I was damn lucky yesterday to cover some distance.

Posted by Govinda Nelyaru at 10:06 AM