Today I had successful 114.7 km trike ride. I could start only after 915 AM as I had to drop my kid to bus before that. Rain also stopped me for about an hour.

Actual riding duration was about 5 hours and 31 minutes.
Average speed was 20.5 kmph.

My batteries capacity is 20 Ah but today during mid day break I kept it for charging adding another 6 Ah. Out of that I had used up 24 Ah by 6.30 PM.

Consumption was about 7.6. Wh / km. I was not paying attention sometimes to throttle level and more keen maintain average speed contributed to increased power usage. The part very close to my house is very bad with sharp edged boulders while going uphill. That consumed some extra power.

I took GPS to track the distance as my cycle analyst gave me problems yesterday regarding distance recording. Early part of ride I did cross checked GPS and meter few times to make sure it works ok.

Morning I went towards Upinangady on National highway and took a U turn about 8km after Uppinangady. Normally I have rest stops secluded places. Today there was few villagers chatting nearby and came to talk with me. They were curious of this strange machine. 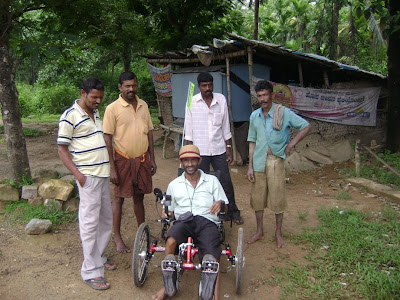 My younger son calls KSRTC busses as kesaratisi meaning throws muddy water. Today on a wet patch, the muddy water was liberally thrown at me by the tyres of passing bus.

People frequently want to stop me and ask me questions. One question is Cost. I have decided to keep this aspect confidential now for security considerations.

Morning had covered 62 km and balance was done in the evening. Evening anticipating rain, I delayed for about 20 minutes. But later on the way there was rainfall and I took shelter under a petrol pump. Morning while returning I had visited same pump to check air pressure in tyres. Unlike other cycles, these have same tyre valves like in automobiles.
Posted by Govinda Nelyaru at 6:55 AM