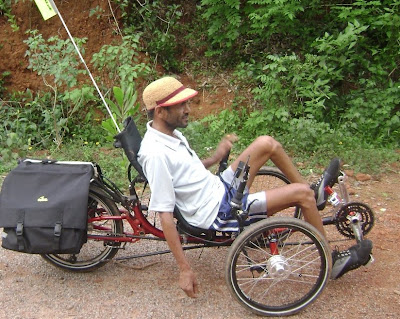 Ashok and myself finally realized that the sophisticated Li Ion battery charger cannot be repaired here. So I decided to send it to Shanghai. Before sending I had to decide which among the couriers is the best bet. Having had bad experience with two of the reputed ones, I could not make quick decision.

My trike from UK came by UPS & it was stuck in Hyderabad for more than twenty days for no apparent reason. I missed lot of sunny days practice because of this late delivery but later on they refunded GBP 230 ( About INR 16000 ) shipping cost . Moreover I had already paid more than INR 4000 as customs duty on that amount too. The frustration trying to communicate with UPS customer service simply cannot be put into words.

The senior staff of UPS were not really helpful & some were outright harsh. Their Customer service telephone number also did not work properly. Responding to my mail one of them even wrote to me asking my phone number when my letter itself contained my phone numbers & Email ID. It was like asking – Rama, What is your name ??

The motorized wheel carried from China by TNT. The custom clearance was handled by them at no extra cost but I had to pay a heavy price for communication difference. The IEC code is not mandatory for personal imports but Delhi Customs were arbitrarily imposing INR 8000 penalty which was not properly communicated to me. I had IEC code which I procured during ATV import earlier but was not sent this time to clearing agency.

The original documents of this consignment from China was delivered to me by TNT one month later and I had to write to them many times for that. Documents took ten days to reach here from Bangalore which is 350 km away. We have to submit a copy of Bill of Entry to exchange control department thru the bank we made money remittance and naturally I was concerned.

The in charge lady in Mangalore simply ordered over telephone come here and collect if you want that document and I retorted it is your duty. I rushed a mail to Bangalore office which chastened her. She called little later and offered to send it next day.

So two bitter experiences made to look for alternatives. So settled for government owned SPEEDPOST. The services of government owned telephone and courier may be bit bad but you know that somebody can be held accountable.

The guy in the post office in Mangalore baulked looking at Li Ion charger and I explained it is just a charger and non hazardous. Then they put the words – at senders risk and accepted the package. Incidentally I had used a Li Ion laptop battery package.

Meanwhile WaiWon sent two chargers on 13th July from Shanghai by TNT and the news itself gave me lot of relief. Many thanks to Cyclist friend Shreekumar who helped me in organizing this.

http://www.tnt.com/express/en_in/site/home.html Tracking number 976048816. It was repeat of earlier experience. Complaining to Bangalore hastened the delivery after the package spent three days in Mangalore which is just 45 km from my home. Finally the package reached me on 23rd July evening.

The tracking of the charger I sent to WaiWon by speedpost on 15 July was also a adventure unlike private courier companies where single website tracks the package end to end. Here I lost the package position in first site & after some searching leads to second only to lose again once the package reaches Beijing. The third site that tracks internal movement in China finally confirms the package delivery on 20th July. This site also shows our package's latest location on Google Maps.
http://services.ptcmysore.gov.in/Speednettracking/Track3.aspx?articlenumber=EK703719736IN

http://www.ems-tracking.net/single-ems-tracking.php?number=EK703719736IN
Simultaneous tracking the two way traffic was fun like watching a closely fought football match especially with very cold & wet conditions outside in which I couldn’t go out and pedal. Finally Speedpost won by five days. TNT took almost double that time. Finally it was not rabbit but tortoise winning the race. Private courier companies have really attractive advertisements on TV but service and accountability is often poor. Hats off to SPEEDPOST or EMS.
Posted by Govinda Nelyaru at 4:02 PM